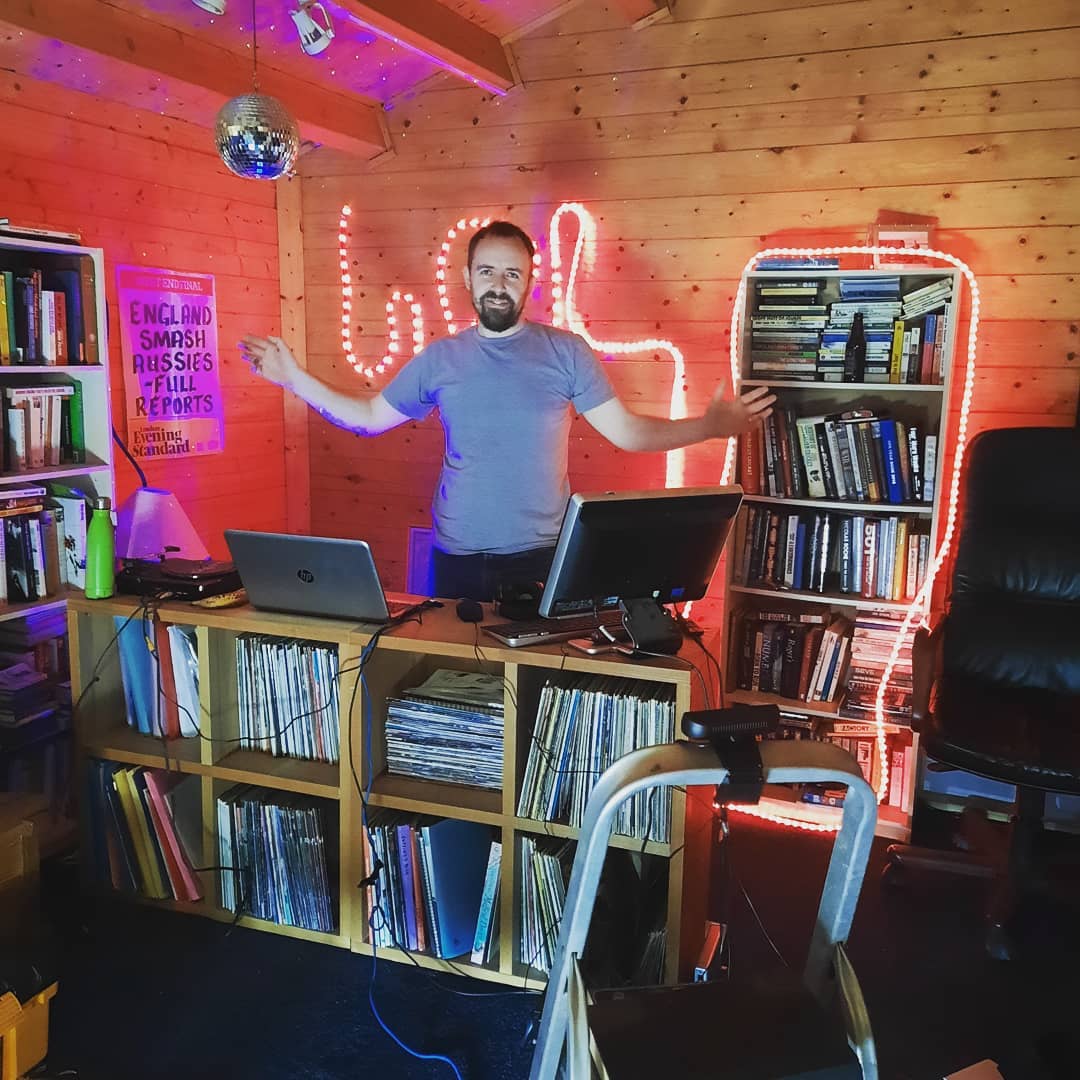 The idea to livestream for 24 hours non-stop had been forged after recently coming across a brief obit I had written of Will’s passing in an old Chelsea FC programme, alongside a ticket stub the last time I had seen him alive – 25 years ago last month.

And so to a weekend spent largely on my feet playing music and staring down a live webcam in an office shed. Only in lockdown.

I wasn’t sure how this would all pan out. There were a few raised eyebrows – ‘Has he got that bored in lockdown?’ … ‘pretty weird idea!’ the general gist – but I knew that over 24 hours, momentum may be the winner. Never did I envisage that over £6,300 would be raised for a brilliant charity (you can still donate here).

The Saturday afternoon entree thankfully passed with no glitches. England lost in the rugby. Time to hammer the disco, funk, electronic section. A long 6pm-1am slot.

The comments section alongside the stream was now providing a wonderful connection with all who watched. The journey wouldn’t have been the same without it. A real motivator.

It was hard to keep up with all the brilliant ramblings from all the Will-iebers, but it was clear that the usual Saturday evening monotony we currently live in was being broken!

‘Possibly the most fun we’ve had in the kitchen for about a year,’ wrote one kind donation supporter.

As the UK viewers slowly peeled off, the Asia Pacific market began to log on. Much needed. 3-4am – starting off with a KLF request of course (thanks to a pair of Charlies) – was the toughest period.

Yet, the comments still came in, even one from an early hours bathroom caller checking up on the stream. Thanks, Simmo.

The music was down tempo from 4-7am and perhaps the lack of beat added to the slow going. My Monday feet blisters may well be worse if I had prevailed.

As the UK awoke, I received an early message from a friend, the family clearing out the home of her late father as they listened to the stream. From friends, Will’s family and friends, old acquaintances and new, thus began a wondrous morning fueled by comments. People were out dog walking, gardening, hoovering, in the car via bluetooth, preparing lunch, listening and grooving!

My wife was providing buoyant updates and generally geeing things up as the 10am slot dedicated to friends of WWMT and Le Loop took hold. This really was the moment to celebrate Will’s life and the power of music hopefully added to the occasion. It was an uplifting, emotional and joyous ending.

Thanks to every kind supporter – in all, there were over 2,000 views on the livestream – I won’t forget the last days of February 2021.

* As the whole comments section didn’t save, I no doubt missed contributions of what people were doing or how you were listening during the 24 hours. If you want to share anything, please do below. Or email me. It would be great to get a sense of the occasion.

I still recall the knee-scraping feeling every so often.

The moment came 25 years ago last month as Chelsea striker Paul Furlong netted a stoppage-time goal at QPR. A header I think. Jumping up to celebrate, both our knees made contact with the plastic rim of the seats in front of us at the compact Loftus Road. We cared not a jot as we both embraced. 2-1 to the Blues.

It was the last time I saw my friend Will Wates, together with his brilliant smile and warm, enthusiastic companionship on that cold January evening.

Later that year he was tragically killed outside the Honduran capital Tegucigalpa, a victim of street crime.

He was 10 days away from returning home from Central America and starting out at Nottingham Uni as his 20s’ beckoned.

Twenty five years on his life is still celebrated thanks to the wonderful, tireless work of his family, who set up the William Wates Memorial Trust (WWMT) two years after his death.

Its aim has been to help disadvantaged teens through sport, arts and education; to fulfill their potential and keep away from street crime. Over the years we’ve heard talks from many inspiring charities and not-for-profits who have benefited from project grants.

Will would have given a seal of approval for each one.

Several million has also been raised through Le Loop, the exceptional charity cycling event – an offshoot of WWMT – which sets off annually a week before the Tour De France. I’ve taken part in two editions, attempting to ride seven stages across France and the UK. I’ve written several articles on the Tour here.

And so, thinking back to that away end evening exactly a quarter of century ago, came the mad lockdown idea of raising money for WWMT and to DJ solo for 24 hours non-stop. Spinning tracks not spokes seems less arduous than tackling Alpine cols – even if I will be on the decks for hours more than a stage in the saddle.

His life taken away needlessly and far too early, memory now has my 90s’ teen pal wearing his cherished leather jacket listening to INXS or Simple Minds (’25 years since they took that man away’ so Mandela Day goes).

Playing tracks for a whole day (starting this Saturday @ 1pm) does mean I can raise donations without leaving home. I last DJ’ed a decade ago, however, and keeping rhythm, mixing and mind in check uninterrupted will present its own challenges.

The set will be bookended by Harry J & The Allstars’ classic Liquidator, the track Chelsea players run out to at home games. In between, I’m relying on word of mouth over 24 hours this weekend to raise the WWMT profile. So, friends, set those Zoom house parties up. I’ll take track requests and, who knows, may even don some fancy dress.

Live streaming link will be here, on the fundraising link and my social channels on Saturday. You can play via mobile, laptop, or even link up to your TV.

How it will work

Using various bits of tech, occasional DJ software and turntable. So call this the mobile DJ of old, the days when Wonderstuff was mixed into Rozalla. I will be using an overlay mix and there will likely be a few mistakes and the odd bit of panic. But once in rhythm, there will be no stopping.

I will be covering 70s-90s classics, Northern Soul, funk, latin, indie, disco/deep and electronic house. Music for the soul. Do join!

END_OF_DOCUMENT_TOKEN_TO_BE_REPLACED

I couldn’t sell this one for the national papers – and was too good to spike.

END_OF_DOCUMENT_TOKEN_TO_BE_REPLACED

During February, I spent several days in Lancashire with Laura Massaro, Britain’s former world No 1 and world squash champion.

Having signed a book deal with Laura to tell her story, with a working title of ‘All In’ and publication date tba, lockdown was well timed with the live sporting landscape obliterated to finish the manuscript. Laura has a fine women in sport tale to tell of her rise to the top and her off court pursuits to be the best on it.

The book will be my fourth on squash.

Lockdown handed the chance to speak about hockey and the media landscape, chatting with colleagues from India, Holland and Argentina. A rich 90-minute chat.

Herewith a list on the best films and books I’ve seen and read on the subject.

Spotlight (2015)
How Boston Globe’s investigation team exposed the Boston Catholic Church sex abuse scandal. It’s uncomplicated feel is a marvel and the fact there is no lead actor as such, is one of countless reasons why this film works. The scene at the end as both editor and reporter enter a room full of ringing phones is simply hair-raising. Spellbinding.