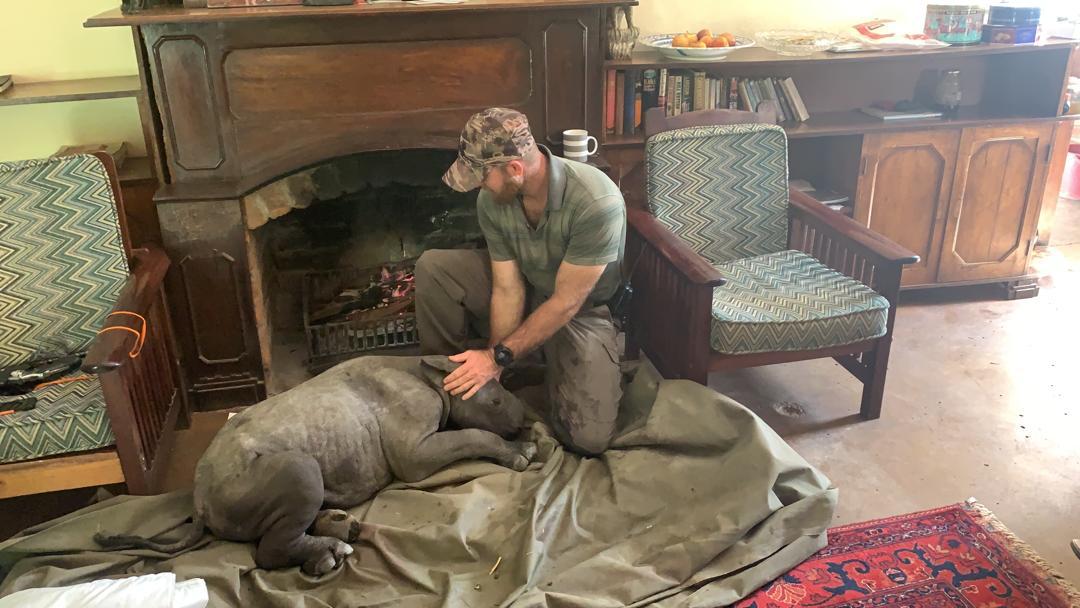 I couldn’t sell this one for the national papers – and was too good to spike.

“At the time Rocky was just chuffed to be out of the mud, it was then given fluids and it had a bit of bounce to it,” Anne’s son, Guy, a former Zimbabwean international Test cricketer, told me.

“So much went into it from the support team on the ground and it was an amazing operation. We really enjoyed monitoring it and the key now has been to make sure this little guy is fostered well.”

The Whittalls first received a call from the Special Species Protection Unit (SSPU), a military-trained unit protecting rhino in the Safe Valley, who had hauled the baby rhino to safety after being submerged in a cold water pan.

With the mother failing to return and the calf too weak to suckle after its ordeal, the rhino was taken to Humani Turgwe River Lodge, a guesthouse run by the Whittalls, following consultations with rhino experts across southern Africa.

Given special clearance to pick the calf up, Anne met Rocky and introduced herself by calmly rubbing noses.

With flights grounded due to lockdown, the family relied on Zimbabwe’s national parks authority to make sure capture and helicopter permits came through in time as a plan was hatched to rehabilitate mother and son.

The SSPU, who are skilled at identifying rhino, set about following the mother’s signature tracks – but it was far from easy.

Guy added: “It’s not just a case of doing a sweep and finding the rhino in the area. They were chased by elephants a number of times, which meant they had to do loops to get back on track.”

When the two rhinos were reunited, the sleeping pair – the mother was darted and her horn blunted in case it lashed out at its calf on waking up – were placed next to each other.

Once they were awake, Rocky initially followed his mother into the bush, but he was soon left on his own and the decision was taken by vets to return her to the Whittalls.

At first, the black rhino had a 24-hour rota of three carers who fed him milk every three hours while he took to wearing a blindfold at night to combat stress.

He has since been sleeping through the night on an electric blanket next to a heater and makeshift branches hanging over its bed. Weighing a meagre 45kgs when he first came to the lodge, Rocky has now hit the 100kg mark after being nurtured back to health and is still hand fed milk on a daily basis.

Guy added: “It has been hard but we are doing what is best for him, he is after all a Black Rhino and is naturally a very solitary and non-social animal and very prone to stress.”

Rocky will soon have his own pen and territory – built to international standards as a protected species – and will stay for up to four years before he wanders free on his own.

Guy said: “When we do let him go it is known that if he is released into an area with other bulls, they will kill him. It has happened in the past and these are things you learn as no one really knows much about these rhino.”

The Whittalls are no strangers to wildlife living at their Humani lodge. In 2007, Anne orphaned a baby rhino called Jimmy at home after its mother was shot by a poacher. Too scared to leave its mother, the rhino was found in a nearby bush before being taken to the Whittalls where it was raised for five years.

Guy, a director at Tredelk Safaris, added: “Black Rhino need to be in a quiet place and alone, that’s why mothers hide them in thickets.

“The whole thing with my mum is that all animals must go wild, being brought up in the garden before going wild.

“She used to take them for walks to get used to their surroundings and then over a period of time they eventually go out when it suits them.”

The Whittalls hit the news in 2013 when Guy woke up to discover an eight foot long crocodile hiding under his bed.

Guy had put his feet over the bed as he set about his day before the creature was spotted. It was later captured and taken back to its natural habitat.

The family’s love of animals has seen the vast Save Valley conservancy become one of the most successful wildlife conservation areas in the world.

Since 2000, Roger Whittall, wife of Anne, has spent over £1.5 million on anti-poaching measures.

He first started to restock the 30,000-acre conservancy area with wildlife in the 1960s and hires over 30 game scouts, many of whom were once top poachers.

The Whittalls have set up a Go Fund Me page to continue Rocky’s rehabilitation as well as anti-poaching measures.